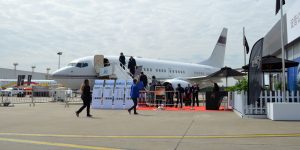 Greater China has become a central market for Boeing Business Jets (Chalet 2) for both new and pre-owned aircraft, according to Greg Laxton, the new head of the company. Over the past five years, the BBJ fleet in the region has swelled by 190 percent.

Speaking at his first major business aviation events since taking the reins of the Boeing unit last month, Laxton highlighted the important role that Greater China in particular, and Asia Pacific more broadly, has begun to play in the BBJ program. “This region, Greater China, is coming on,” he said. “Boeing really believes this is the region of tremendous growth.”

The Asia Pacific accounts for 22 percent of the in-service BBJ fleet, making it the third-largest region for BBJsales behind the Middle East (30 percent) and North America (24 percent). In Greater China, the BBJ fleet has jumped from 10 aircraft in 2012 to 29 this year.

This success is coming from both pre-owned and new sales. In fact, Greater China has accounted for 42 percent of all pre-owned BBJ sales since 2012.

The fleet is slated to continue to expand in the region this year with two BBJs, one BBJ 2 and a BBJ 787—all new-production aircraft—set to enter service. Boeing Business Jets has moved to keep pace with service as the fleet continues its rapid expansion, recently appointing Ameco Beijing as an official BBJ warranty service center. A joint venture of Air China and Lufthansa, Ameco has long serviced Boeing aircraft.

While the fleet has grown in the region, sales worldwide had been slow for the most part of last year. But they picked up in recent months, with orders for six BBJ models logged since early December. “We’ve had a good beginning to the year,” said Charles Colburn, marketing director for Boeing Business Jets. The division has sold a total of seven since a year ago.

This success is expected to continue with a number of “very active” discussions ongoing in China, as well as other regions such as Europe, Colburn said, adding, “In the short-term, the China market is the hot market.”

The recent orders included the first for the new Max 7 BBJ variant that had been announced last fall. In all, the company had sold four Maxs, two BBJs and a BBJ 787 since ABACE last year.

The first of the BBJ Max family, the Max 8, will enter the region in 2018. Two are slated for delivery that year.

Boeing is nearing the end of traditional 737-based BBJ sales, Colburn said, noting that soon they will transition to all-Max sales. Boeing allocates six 737 production slots a year to Boeing Business Jets, although he said the bizliner division can ask for more. With that allocation, the company has sold into 2019, when the Boeing 737 line is expected transition over to a primarily Max line. This leaves only the final few slots for the traditional 737-based BBJs.