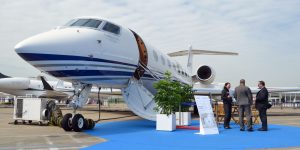 Gulfstream Aerospace will deliver its first B-registered ultra-long-range G650 to a Chinese customer this month, following certification of the G650 and G650ER by the Civil Aviation Administration of China in February. There are already 23 G650s operating in Greater China, according to Roger Sperry, Gulfstream regional senior v-p for international sales in Asia-Pacific.

These G650s are part of the 185-strong fleet of Gulfstreams in Greater China, which includes 110 in mainland China. Gulfstream now holds 70 percent of the large-cabin market share in the country, Sperry said. Just 10 years ago, the Asia Pacific region represented a mere four percent of Gulfstream’s then-fleet of 1,900 aircraft worldwide. Now the region accounts for 12 percent of the 2,600 Gulfstreams in service, he said. “That’s the largest market behind the U.S., and more than Europe. It’s been a huge amount of growth for us.”

While China customers have largely purchased the G450, G550 and G650, there are 10 midsize Gulfstream G200s and G280s in China. The G280 can fly from Shanghai to Singapore, which serves customers needing business aviation transportation in the Asia Pacific region. But most China-based customers are using their large-cabin Gulfstreams to travel all over the world, especially from China to the U.S., Europe, Latin America and Africa, hence the popularity of the larger Gulfstreams.

Now that the G650 is certified in China, Sperry sees a “tremendous market” for the jet and likely a new cycle of sales. Later this year, the new fly-by-wire G500 is due for FAA certification then entry into service, and he believes its combination of cabin size (width 2.41 meters/7 feet 11 inches, height 1.93 meters/6 feet 4 inches) and range (9,260 km/5,000 nm) will make it and its longer-range (11,480 km/6,200 nm) G600 sibling a popular choice for Chinese buyers. Although Sperry can’t reveal specifics about G500/G600 sales in China, he said that Gulfstream has logged many sales of the new jets “around the world.”

Gulfstream’s success in the Asia Pacific region has much to do with the company’s decision to invest in the area beginning in the late 1980s. “I started coming here 25 years ago,” Sperry said. “We knew there would be a market.” Now Gulfstream employs more than 75 people throughout Asia and operates a service center in Beijing.

Today, Gulfstream is as busy as it was four years ago, with the number of inquiries about its products and the amount of sales proposals growing. “Buyers are continuing to purchase,” he said, “and people continue to expand their business and to understand how to operate business jets.”

Another factor contributing to business aviation success in China is that, compared to five years ago, operating a jet in China has become easier. Flight plan approval used to take a week, but now is down to one day, Sperry said.

Although it would help if more airport takeoff and landing slots were made available to business aircraft, local operators “are used to an operating environment like this,” he noted. “And the growing number of B-registered aircraft helps, too, because they have access to more airports in China, compared to non-China-registered jets.”

Gulfstream operates a factory-owned service center at Beijing’s Capital Airport, where it has made a significant investment in facilities and training. The center supports all Gulfstream models.